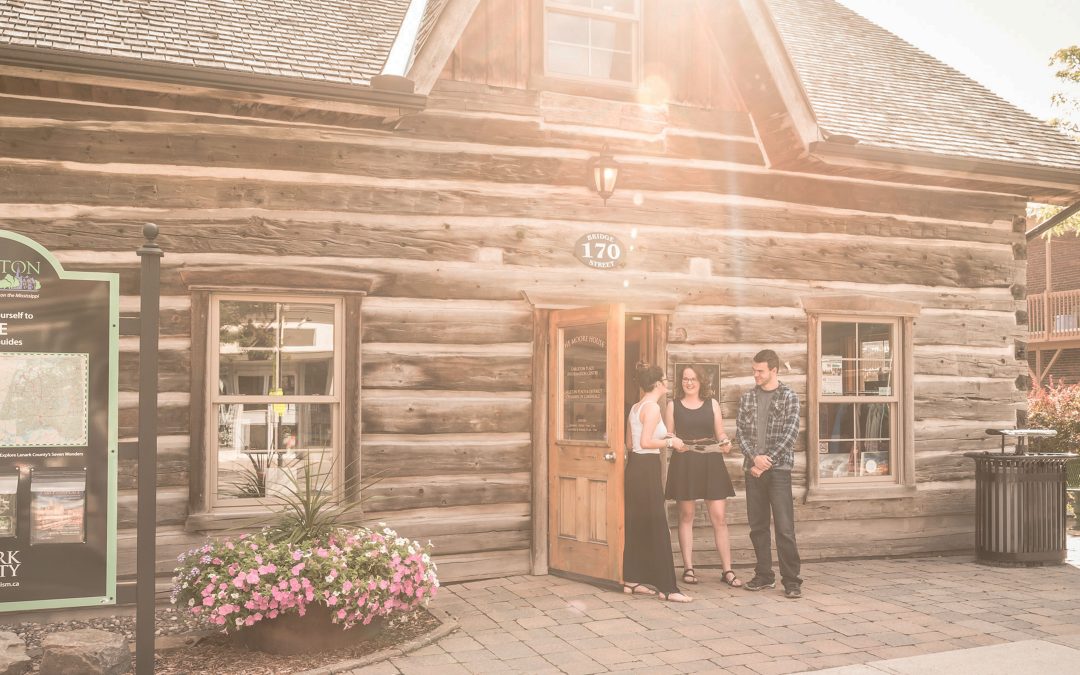 Visiting a new community can be exciting, so much to see, and so many unique buildings, historical sites and scenic locations to visit. Bring along your phone or camera and grab some shots of these 11 photo worthy landmarks and you will walk away with some fantastic photos to remember your visit. Don’t forget to say cheese! #capturecarletonplace #cplandmarks #comewander

1. Canadian Co-operative Wool Growers (Old CPR Roundhouse)142 Franktown Rd. 613-257-2714 | www.wool.ca The Canadian Co-operative Wool Growers (CCWG) has called Carleton Place home since purchasing its current location, an abandoned CPR roundhouse and repair depot, in 1940. Today, the CCWG receives nearly three million pounds of wool each year, and also houses a fashion store that sells hard to find wool products, along with a livestock supply and equestrian outlet. Visitors are invited to explore the former engine room, which has been transformed into a mini-museum of railway exhibits and memorabilia.

2. Canadian Pacific Railway Station 132 Coleman St. The Canadian Pacific Railway (CPR) was an important contributor to the founding and development of early Carleton Place. The CPR station in Carleton Place is a picturesque, single-story, standard design station built in 1921-22, that served both freight and passenger traffic before service was discontinued in 1989. This station is the sole survivor of seven stone stations built in the upper Ottawa Valley; it was designated a heritage railway station for its historical and architectural significance. Today, it houses the Ginger Café, a local eatery.

3. Carleton Place Town Hall 175 Bridge St. 613-257-6200 | www.carletonplace.ca Carleton Place Town Hall was build between 1985 and 1987, and designed in the Richardson Romanesque style by Toronto architect, George King. This building offers stunning architectural features and a fascinating history. Take a tour inside and watch for the grand staircase, second floor opera hall and wooden panels and stained-glass windows in Council chambers. Look for historical plaques on display inside the Bridge Street entrance, or in the main hallway, inside the building.

4. Moore House 170 Bridge St. 613-257-1976 | www.cpchamber.com Moore House is one of the oldest remaining buildings in Carleton Place. It was originally built by J.P. Moore on land originally granted to his father, William Moore, one of the first settlers of the area. This building was donated to the town and moved to its current location in spring of 2007. Local folklore reputes that the ghost of Ida Moore, who passed away from consumption in 1900, is still present in the house. Today, it is home to the Carleton Place Visitor Centre and the Carleton Place & District Chamber of Commerce.

5. Carleton Place and Beckwith Heritage Museum 267 Edmund St. 613-257-7013 | www.cpheritagemuseum.com This heritage designated stone building was erected in 1872 and has served the community as the Town Hall and jail until 1879, and as the Victoria School until 1969. Today, the building is home to the Carleton Place and Beckwith Historical Society, in partnership with the town of Carleton Place, as the primary community museum that is home to more than 10,000 local artifacts. BONUS PHOTO: Be sure to snap a picture of the Community Labyrinth and Gardens, lovingly cared for behind the museum..

6. Federal Building (Old Post Office) 79-81 Bridge St. This historic building was constructed in the Romanesque Rival Architectural style in 1892-97 by the federal government and housed the village post office and customs office. The architect was Thomas Fuller, the same architect of the parliament buildings in Ottawa. The building is made of three types of stone: limestone in the front and two sides, brick on the back wall, and red sandstone for the cornices. In 1913 a town clock was added, with a 150-pound pendulum.

7. Carleton Place Canoe Club 179 John St. 613-257-1838 | www.cpcanoeclub.com The Carleton Place Canoe club is the longest continuously running flatwater canoe club in Canada, and the training ground for past and future Olympic athletes, as well as Ontario, National and Canada Summer Games team members, and competitors in the Junior World Championships, and Pan Am Games. Visitors will find the Canoe Club nestled on the shore of the Mississippi River in the former blacksmith shop of the Caldwell Lumber Company. In 2018, the Canoe Club is celebrating its 125th birthday. Who knows how many more Olympic athletes will get their start here?

8. Riverside Park 137 John St. Carleton Place 613-257-6200 | www.carletonplace.ca Riverside Park is an oasis of wildlife and nature that runs alongside the Mississippi River in Carleton Place. With ample trees, picnic tables and grassy areas, playground and splash pad, the park is the perfect spot for a waterside picnic. Take advantage of the beauty of the Mississippi River for some stellar photographic opportunities along the waterfront.

9. The Grand Hotel 7 Bridge St. Built as the Mississippi Hotel, the Grand Hotel is a new occupant for this historic building. Built in 1872 from Beckwith limestone, the building was enlarged in 1890 and was once considered to be among the finest hotels between Ottawa and Toronto. In 1959, a devastating fire destroyed the upper floor and ornate verandas, which were not rebuilt during its restoration. Stompin͛ Tom Connors wrote his song, Big Joe Mufferaw while staying here in 1967. Today, the building houses the Smith and Barrel pub, and serves as a hotel and wedding event venue.

10. The Tannery 12 Bell St.
Located on the Mississippi River, this building was formerly a tannery that relied on water transportation to receive its materials. A log addition to the original limestone building was made in 1980. Today, this building is home to the Waterfront Gastropub, a local eatery with a scenic outdoor patio.

11. RBC, Royal Bank 93 Bridge St. Originally home to the Union Bank of Canada, this imposing building is built of concrete blocks made to resemble stone. Columns with iconic capitals support an entablature with dentil work. Look closely and you may spot the former lettering that remain above the columns. Today, this building is home to the local RBC, Royal Bank.